JOIN US IN SUPPORTING OUR FUNDRAISING EFFORTS
TO BUILD THE FIRST LUTHERAN CHURCH
IN BUDAKESZI, HUNGARY!

Our small town Budakeszi was predominantly German-speaking and Roman Catholic before World War II. After the expulsion of the Hungarian Germans, people from all over the country settled here to provide labor for the capital’s industrial projects. In the past few decades, many families have moved out of the capital. For more than 50 years our small congregation was the diaspora of the large Budahegyvidék Lutheran Congregation.

We used to worship in the Reformed Church of Budakeszi monthly, then twice a month. In 2007 the Lutheran Church in Hungary (LCH) decided to set up a position for a pastor who could be in charge of ministering the growing congregation. In 2008 the LCH purchased a part of the house and, with the help of the Buda District of the Lutheran Church and GAW, the old building was converted it into a community hall. We had 50 seats there. Since then we have been able to hold church services every Sunday (family church service on the 2nd Sunday of the month in the morning and church service in the evening). In addition, Bible studies for various groups, mother-child circles, youth groups, and adult catechesis serve to promote our ministry. After their confirmation more and more young people become parishioners themselves.
In the meantime, the Congregation became officially autonomous and the parish hall soon was found too small. We are very grateful that with the help of The Lutheran Church in Hungary, the Hungarian Government and last but not least thanks to the willingness of the parishioners to make sacrifices, a new church building was built between November 22nd, 2019 and November 22nd, 2020. Our new church is to commemorate the Christian Martyrs of the 20th-21st Century. The six pillars represent the Carpathian Basin and the six continents; each pillar contains the names of twelve martyrs from several Christian denominations. The altogether seventy-two names symbolize the disciples Jesus sent out to the world.

Because of the pandemic, the consecration is likely to take place only at Pentecost Monday 2021. At the moment only the Sunday worships can take place on-site but the other programs continue online.

In May 2017 we had the opportunity to purchase a small organ from the Cathedral in Speyer, Germany. An enthusiastic group from the community dismantled the instrument themselves and took it to Budakeszi. It is our hope that it will be rebuilt in its original form between March 16, 2021, and May 15, 2021 by the organ building workshop Paulus.
The area around the church is now quite barren, as it is natural after the construction work. The congregation has also started a church garden project. There are also smaller needs, such as furnishing the office and the kitchen.
We are very grateful when church or other communities or private individuals can support our projects.

The congregation has 350 members.

Please join us in reaching our goals!
Support the building of our church with your contribution!
You can help:

You have faithfully guided us until now. We build the life of our congregation upon your promise: „Behold, I will do a new thing; now it shall spring forth; shall ye not know it?” We gratefully experience your steadfast love in our midst. Lord, continue to build the community with and in you. We thereby commend the cause of the building of our church into your hands since we know that „Except the LORD build the house, they labour in vain that build it”. Bless our plans and our church-building efforts that will serve the strengthening of the community and glorify your holy name.

Name of the Foundation:

THANK YOU VERY MUCH FOR YOUR DONATION! 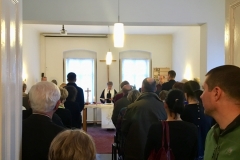 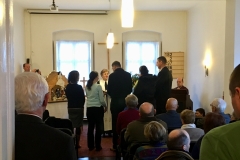 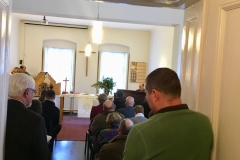